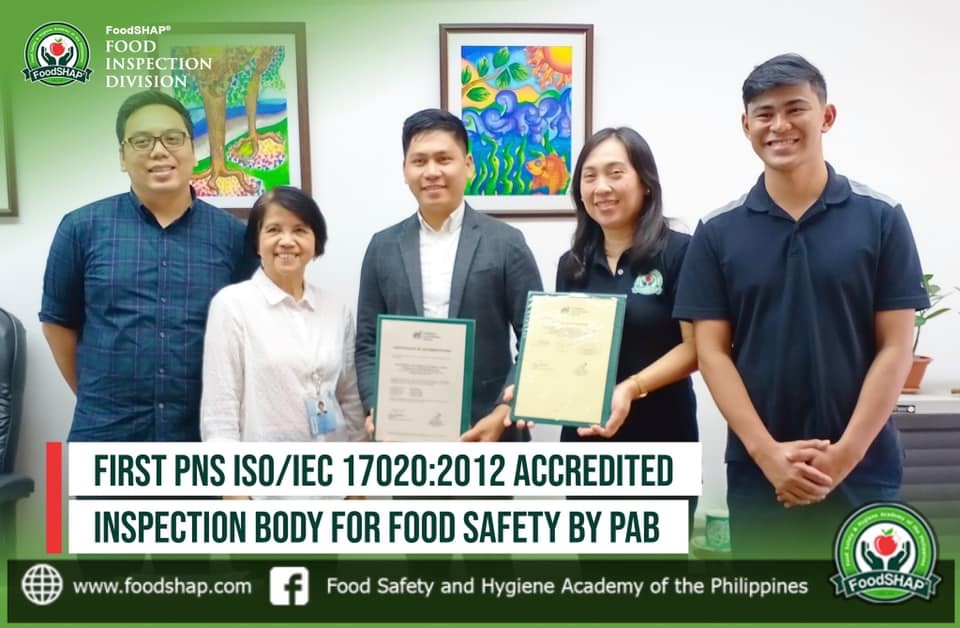 FoodSHAP® is now ISO/IEC 17020:2012 Accredited for Food Safety Inspection by DTI-PAB. FoodSHAP® was assessed last November 25-26, 2019 by the Philippine Accreditation Bureau (PAB), complying with the requirements of the certification such as competence, impartiality, and consistency The certificate issued on January 21, 2020 is valid for four years (2025) provided that FoodSHAP® adheres to the requirements and standards of PAB.

The International Organization for Standardization 17020 (ISO 17020) or the General Criteria for the Operation of Various Types of Bodies Performing Inspection is an internationally recognized standard for the competence of inspection bodies.

As of today, FoodSHAP® Food Inspection Service is the first inspection body for food safety in the Philippines under ISO/IEC 17020:2012 accredited by the Department of Trade and Industry's Philippine Accreditation Bureau to issue certificate of inspection for food establishments demonstrating strict compliance to food safety, hygiene, and sanitation standards

Before the certification, the Philippine Accreditation Bureau assessed the inspection team and personnel through a series of interview on the company’s policies and their respective roles. An actual inspection by FoodSHAP®’s Inspection Team was also observed by PAB.